HGH Benefits & Side Effects for Men and Women 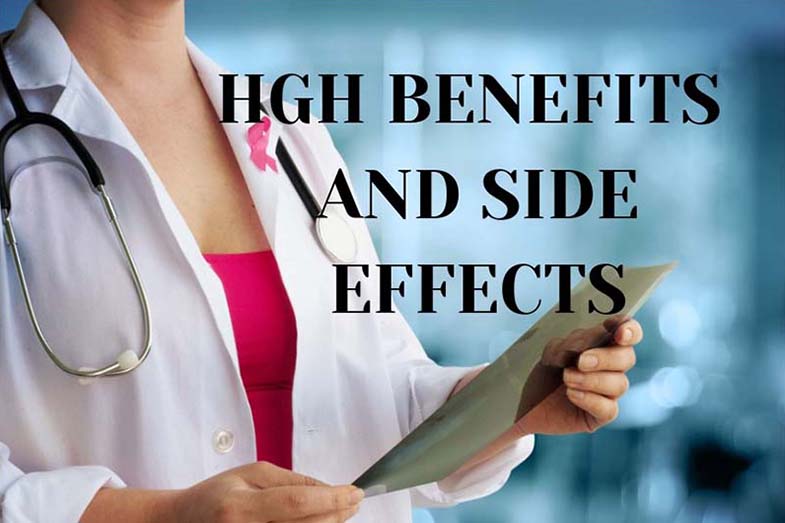 Human growth hormone (HGH) can provide many benefits when prescribed by a doctor. Yet, the therapy is not a “wonder drug” or “fountain of youth” and improper use can lead to side effects.

HGH injections are appropriate for patients who have a relevant medical diagnosis. There are 3 indications for HGH therapy in adults: Growth hormone deficiency (GHD), Short bowel syndrome (SBS), and muscle wasting due to HIV/AIDS.

Your doctor may have to run several tests before confirming the diagnosis. That includes blood tests, stimulation tests, and imaging diagnostics.

HGH therapy can help you relieve all your GHD symptoms. The first benefits of growth hormone, such as abdominal fat loss, occur after 4-8 weeks of treatment.

On the other hand, growth hormone has very few side effects, which can be mitigated or completely avoided by reducing the dose.

Currently, HGH therapy is the only effective way to treat GHD. Other HGH products such as dietary supplements and secretagogues may stimulate natural GH production but only in healthy individuals with preserved endocrine function.

What is HGH used for?

Growth hormone plays an important role in almost all anabolic processes in the body, tissue recovery, and fat metabolism. Currently, the only reliable way to restore its levels back to normal in patients with GHD is growth hormone therapy. 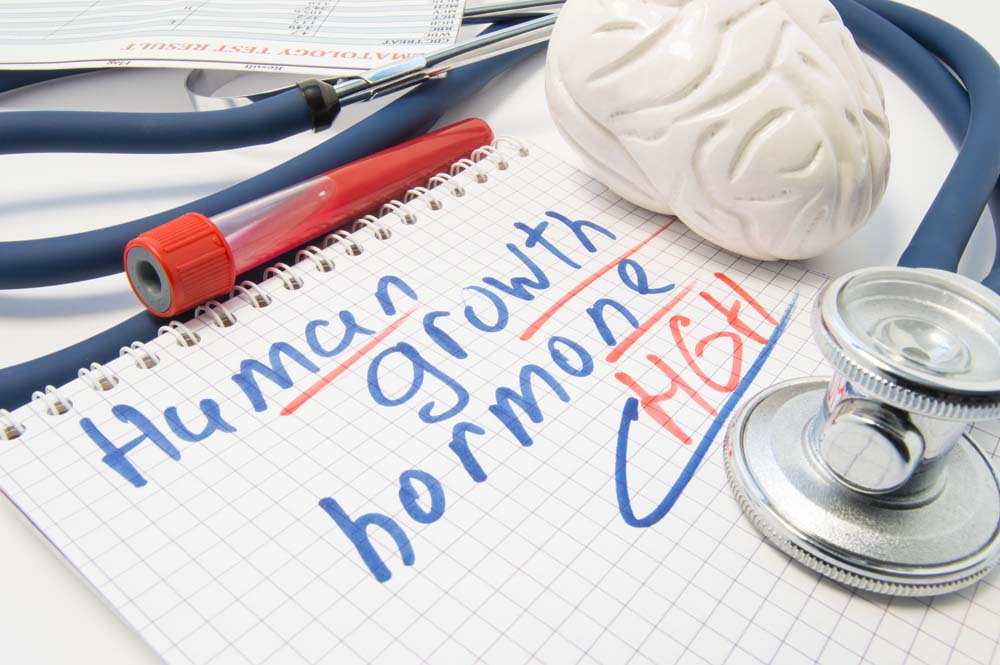 HGH injections contain an exogenous hormone produced in a lab using recombinant DNA technology. The technology ensures that the recombinant GH is identical to the one naturally synthesized by the pituitary gland.

Therefore it has the same effects and safety characteristics as the endogenous growth hormone.

However, other commonly desired HGH benefits such as anti-aging or increasing height in adults are rather myths than reality. Just like the natural growth hormone, recombinant growth hormone injections won’t increase height in an adult.

Even at doses exceeding the normal references, growth hormone does not affect bone length. Instead, scientists reveal that supraphysiological levels of HGH may cause bones to thicken and lead to a condition called acromegaly.

Another common myth is that growth hormone can reverse aging because it will counteract the age-related gradual reduction in GH secretion.

Currently, the evidence doesn’t support the theory that HGH can reverse any of the signs of aging in healthy people

Several misconceptions about the side effects of HGH are also popular. For example, there is a myth that growth hormone may cause cancer because it stimulates cellular multiplication.

Yet, the studies we have so far report that it doesn’t lead to abnormal differentiation of cells and there isn’t an increased risk of tumors after therapy.

HGH won’t cause malignancies, but the hormone may stimulate the growth of an existing tumor, so the therapy is not suitable for oncological patients.

GH treatment is more commonly prescribed in children since several conditions may cause low growth hormone levels and short stature in this age group.

Nevertheless, adults may also suffer from debilitating symptoms due to low GH levels. Since our clinic is specialized in treating GHD in adults, we’ll focus on the effects of the therapy they should expect.

Is HGH safe or dangerous?

HGH therapy has a favorable safety profile when dosed properly. The therapy is even suitable for patients with diabetes, although growth hormone and insulin are counterregulatory hormones, and growth hormone may increase insulin resistance.

According to the guidelines of the Endocrine Society, diabetic patients can be treated with HGH if their anti-diabetic medication therapy is adjusted correspondingly.

In such cases, high doses of growth hormone should be strictly avoided as they may lead to an acute spike in insulin resistance.

Furthermore, beliefs that therapy may shorten life expectancy are also unwarranted. They are based on animal experiments showing that low GH levels may increase the lifespan of mice.

However, clinical studies in GHD patients report the opposite effect. Therefore, HGH-treated patients had significantly reduced overall mortality compared to untreated ones.

Generally, therapy is safe and well-tolerated except for people with oncological diseases.

There are cases reported of Crohn’s disease where HGH therapy was associated with advanced cancer development. Since Crohn’s increases the risk for colon cancer 20-fold, it is possible that the growth hormone might have sped up its consecutive development.

Most GHD men are at a higher risk of abdominal fat gain and central obesity. This type of obesity is also called visceral, as it accumulates around the internal organs and increases the risk for metabolic problems and heart disease.

GH stimulates the breakdown of visceral adipose tissue. The amount of fat around the internal organs decreases, which leads to lower blood pressure, cholesterol, and triglyceride levels.

According to studies, it takes up to 6 weeks of therapy until any noticeable fat loss benefits.

GHD also leads to lower levels of insulin-like growth factor 1 (IGF-1). This is the main mediator of HGH’s anabolic effects and its deficiency may lead to wasting and loss of muscle mass and strength, more noticeably in men.

HGH therapy stimulates the production of IGF-1 into the muscle tissue, which stops protein breakdown and helps reverse the symptom.

According to studies, the increase in IGF-1 levels peaks during the 1st month of therapy, while the muscle mass continues improving by the 6th month. Furthermore, men on HGH report improved muscle strength and energy levels.

Men report improved sexual function during the treatment. Laboratory studies reveal that the hormone plays a role in stimulating the testicles to produce the male sex hormone – testosterone.

Besides, trials report that IGF-1 correlates with sexual function, which supports the role of the hormone in normal erections.

This role may also be mediated directly by the effect of growth hormone on penile tissue growth. Growth hormone activates enzymes that stimulate vasodilation and better blood flow.

Furthermore, therapy may slow down atherosclerosis in GHD men which is a known contributor to erectile dysfunction

Most of the HGH benefits for women are similar to those observed in men, including abdominal fat loss, improved cardiovascular health, better sleep and mood, increased bone density, and improved quality of life.

Studies in premenopausal women with central obesity reveal that HGH therapy reduces abdominal and visceral fat which lowers the risk for heart disease.

Postmenopausal problems such as mood swings, sleep disturbances, belly fat gain, and bone loss are worsened by low growth hormone levels. These symptoms can be alleviated with growth hormone therapy.

Trials report that 4 months of HGH therapy can reverse some of the sleep disturbances related to the condition. Furthermore, the treatment can improve several scores for depression.

One of the symptoms of GHD is reduced bone mineral density. HGH therapy can reverse the condition by increasing the levels of IGF-1 which has anabolic effects on bone tissue.

However, the effect occurs considerably slower compared to other benefits of HGH and requires at least 6 months of continuous therapy. A study on 80 women reports that after 3-years of HGH treatment, the risk of bone fractures reduced from 56% to 28%.

Women suffering from GHD may also experience skin thinning and dryness. The skin is a constantly regenerating tissue, and its capacity to renew is affected by the GH levels in the body.

There are growth hormone receptors in the skin, which modify the recovery process. Women on HGH report improvements in skin elasticity and hydration, as well as faster regeneration after injuries.

Can HGH therapy be beneficial for the elderly?

According to a meta-analysis of 31 studies, GH therapy can’t do much for the aging process in healthy elderly individuals, apart from a slight reduction in body fat.

Currently, there is not enough evidence to recommend HGH as an anti-aging therapy. Therefore, such use is not FDA-approved, and it’s illegal in the US.

However, HGH therapy in GH-deficient elderly people is highly recommended, as it can lead to multiple health benefits and improved wellbeing. For example, various studies report:

What are the side effects of HGH?

All of these negative effects are either transitory or can be avoided by lowering the dose. Trials report that most of the insulin resistance parameters return back to normal after 3-months of HGH therapy.

Patients at an increased risk of type 2 diabetes should undergo careful dose titration in combination with lifestyle changes which can improve insulin sensitivity. Those include weight loss and increased physical activity.

Your ideal dose will be determined according to your clinical response, side effects, and IGF-I levels. Long-term monitoring requires a doctor’s visit every 6 months.

Rare negative effects of HGH therapy may include retinopathy. There are two reported cases of this adverse reaction, which mimics diabetic retinopathy. However, the condition was completely reversed when therapy was discontinued.

Are there any side effects of stopping HGH therapy?

If you have GHD, then therapy with recombinant GH cannot restore the normal function of the pituitary gland. Instead, it restores growth hormone levels back to normal ranges which can help you manage the symptoms.

Therefore, if you discontinue HGH therapy, your symptoms will likely return. The first symptom that returns after quitting HGH is increased fat mass and central obesity.

Currently, there is no evidence of a physical effect of withdrawal after discontinuing HGH therapy, apart from the return of GHD symptoms.

However, studies report that there might be psychological effects of withdrawal from HGH after long-term treatment. Therefore, GH should be tapered off under medical supervision, rather than stopped cold turkey.

What are the side effects of HGH supplements? 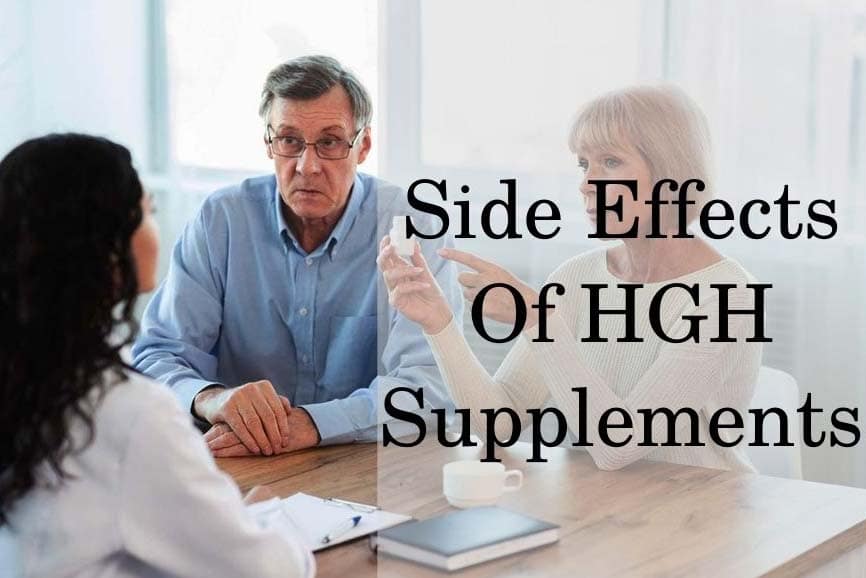 One of the most common ingredients in HGH-boosting supplements is L-arginine. The amino acid is well-tolerated, and the only known risks include mild gastrointestinal side effects.

However, the evidence does not consistently support its effectiveness in increasing natural GH production.

HGH-stimulating supplements are not effective in GHD patients, since the pituitary gland can no longer function normally

Another class of HGH stimulants is the growth hormone secretagogues (GHS), such as GHRP-2/6, Ibutamoren, Sermorelin, Ipamorelin, CJC-1295 and others. They are peptide and peptide-like substances which trigger receptors in the hypothalamus and stimulate.

GHS is effective for increasing HGH production in people with preserved pituitary function. However, their effect is short and requires multiple daily dosing.

Most of these products are not FDA-approved or regulated and therefore illegal in the US.