HGH Effects on Libido and Fertility

The role of the human growth hormone (HGH) for normal sexual health begins even before birth, as HGH regulates the growth and development of the reproductive organs.

Growth hormone deficiency (GHD) during infancy or puberty can lead to reduced penile and testicular size in boys as well as delayed sexual maturation in both genders.

Although HGH decreases after the end of puberty, the hormone still plays a major role in the sexual function in adult men and women.

Your growth hormone levels can affect your libido, sexual performance, and fertility. Adult men with GHD may experience erectile problems while women often complain of vaginal dryness and lack of sexual desire.

In such cases, HGH therapy is the best way to restore the hormonal balance in your body, increase your libido and improve sexual performance.

Which hormones are responsible for libido?

The sex hormones – testosterone and estrogens are the main endocrine factors that regulate sexual desire.

Testosterone (T) affects sexual performance in men mainly by increasing libido. According to researchers, the role of the hormone in erections is to adjust the process as a function of sexual desire.

Although T is the male sex hormone, it can also stimulate sex drive in females. In addition, estrogens such as estradiol are the main driver for sexual desire in women.

This is why the decline of estradiol in postmenopausal women often leads to a lack of sex drive and sexual dysfunction. Estradiol also plays a role in vaginal lubrication, sensitivity, and the ability to reach an orgasm.

Other hormones in your body such as cortisol and prolactin can have the opposite effect on your sexual health. High levels of these hormones can disturb the normal function of your reproductive organs.

Increased levels of prolactin have been shown to suppress sex drive in women and increase the risk of erectile dysfunction in men.

Cortisol is a stress hormone that also has a negative effect on sexual function in both men and women. Excessive cortisol levels can suppress luteinizing hormone (LH) and follicle-stimulating hormone (FSH) production and lead to secondary hypogonadism.

One of the hormones which must be kept in balance for optimal sexual health is HGH. Both deficiency and excess of this hormone can be bad for your libido and sexual performance.

Growth hormone supports your energy levels and cardiovascular health which is important for normal erection in men and sex drive in both genders.

Yet, too much growth hormone can disturb the synthesis and the balance of the sex hormones in the body, leading to sexual problems in men and women alike.

How does GHD affect sexual function?

In men, GHD can lead to reduced sexual desire and erection problems via several mechanisms.

Scientists report that men with childhood-onset GHD who have not received proper treatment may suffer from reduced penis size and subnormal development of the reproductive system. The latter can also result in an increased risk of erectile dysfunction.

Furthermore, the negative effects on the cardiovascular system accelerate the process of atherosclerosis which is the main cause of erectile dysfunction amongst men. Men with GHD also lack the direct relaxational effect of growth hormone on the tissues of the penis. 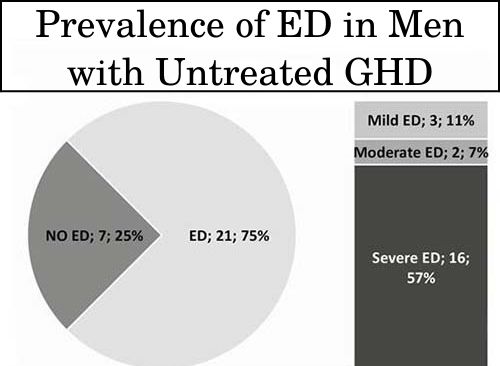 According to one trial, 75% of untreated men with GHD experience erectile dysfunction (ED) regardless of age and T levels. What is more, the majority (57%) of the group were severe cases of ED.

The study also included 15 pre- and post-menopausal women with GHD who did not receive treatment. 100% of those patients reported sexual dysfunction but apart from GHD, age was also a significant predictive factor in females. The aspects of sexual function affected the most were sexual desire, arousal, and lubrication.

Both men and women with GHD report sexual problems, with the most common one being reduced sexual desire. One of the underlying factors leading to those complaints is the exhaustion and chronic fatigue caused by growth hormone deficiency.

In addition, the causes of GHD such as pituitary adenomas or brain injuries can affect the production of other pituitary hormones as well. If the production of LH and FSH is also affected, this can lead to secondary hypogonadism which also manifests with sexual dysfunction amongst other symptoms.

HGH therapy can help restore male libido via direct and indirect effects. First of all, the treatment can reduce symptoms of depressed mood and fatigue, which indirectly improves sexual desire and quality of life.

What is more, growth hormone has been found to stimulate the production of testosterone in the Leydig cells which can be found in testes and ovaries alike. As we already mentioned, this hormone can increase sexual desire in both men and women.

Furthermore, T production inside the testicles is mandatory for normal spermatogenesis and male fertility.

According to researchers, HGH also plays a role in the growth of spermatozoids via its main anabolic mediator – insulin-like growth factor-1 (IGF-1). The hormone stimulates IGF-1 production inside the Leydig cells which stimulates maturation and sperm motility.

During childhood and adolescence, IGF-1 is also one of the factors that stimulate the growth of the male reproductive organs, including the penis and the testicles.

According to research, HGH therapy can stimulate penile growth in boys with GHD regardless of testosterone levels.

Currently, scientists are still investigating whether HGH therapy may increase penis size in adult men, with or without the addition of testosterone treatment.

Studies in middle-aged and elderly men with prostate cancer also reported that IGF-1 levels correlate with sexual function. IGF-1 correlates with GH levels which may help increase erections by stimulating the production of vasodilators inside the blood vessels of the penis.

However, too much HGH may have a negative effect on erections and even increase the risk of erectile dysfunction. For example, trials with men who suffer from acromegaly report a high incidence of erectile problems.

Acromegaly occurs when the pituitary gland produces excessive amounts of growth hormone. This can lead to suppressed LH and FSH synthesis, secondary hypogonadism, and symptoms such as sexual dysfunction.

In addition, excessive GH production in acromegaly is often accompanied by hyperprolactinemia which also suppresses LH and FSH synthesis.

Scientists suggest that women with untreated GHD have reduced fertility compared to their healthy peers. 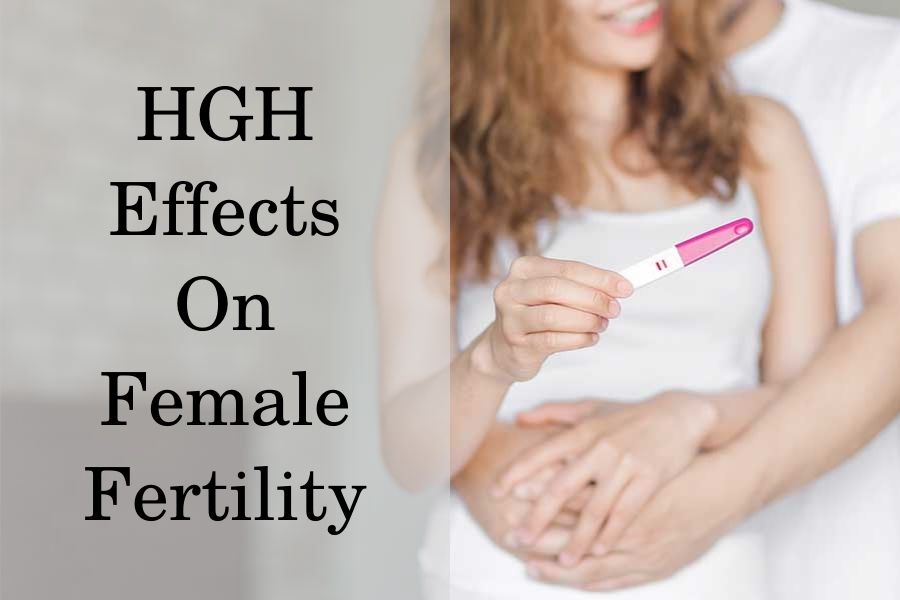 The mechanisms via which HGH supports and increases female fertility are unknown but the researchers suggest that the hormone may help improve the quality of the ovum (oocyte) during its growth inside the ovarian follicles.

What is more, HGH may support the formation of new blood vessels and the blood supply of the growing follicle.

In women with GHD undergoing in vitro fertilization (IVF), HGH therapy has been shown to provide significant benefits.

The treatment improved the ovarian response to the standard therapy with gonadotropins. As a result, the number of developing follicles increased significantly, which increases the procedure’s chance for a successful pregnancy.

However, excessive amounts of growth hormone may have the opposite effect on female fertility. Large amounts of HGH, such as during acromegaly can have negative effects on the menstrual cycle.

One of the pathogenic mechanisms is the negative effects of excessive growth hormone levels on insulin sensitivity.

Higher insulin levels can lead to excessive production of androgens. The latter can suppress normal ovulation and cause symptoms typical for polycystic ovary symptoms (PCOS). Scientists report that PCOS is common in women with acromegaly.

Furthermore, HGH does not appear to exhibit any benefits for post-menopausal women, despite its frequent off-label use for anti-aging. Estrogen replacement therapy may be more appropriate in these patients, as it is shown to reduce the symptoms of menopause and also increase the natural production of growth hormone. 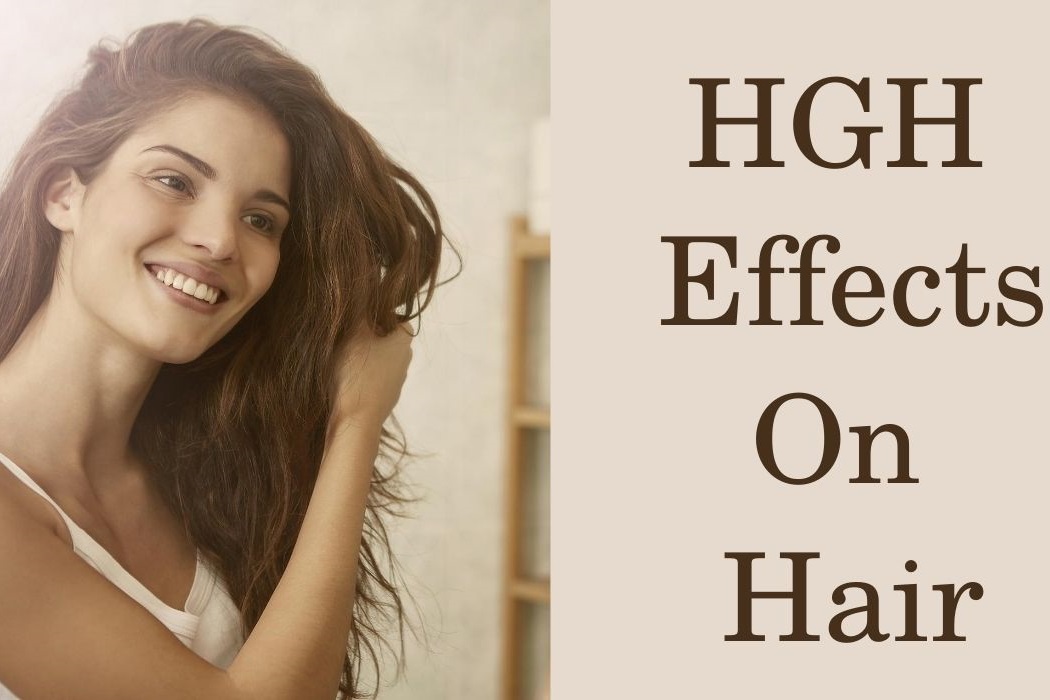 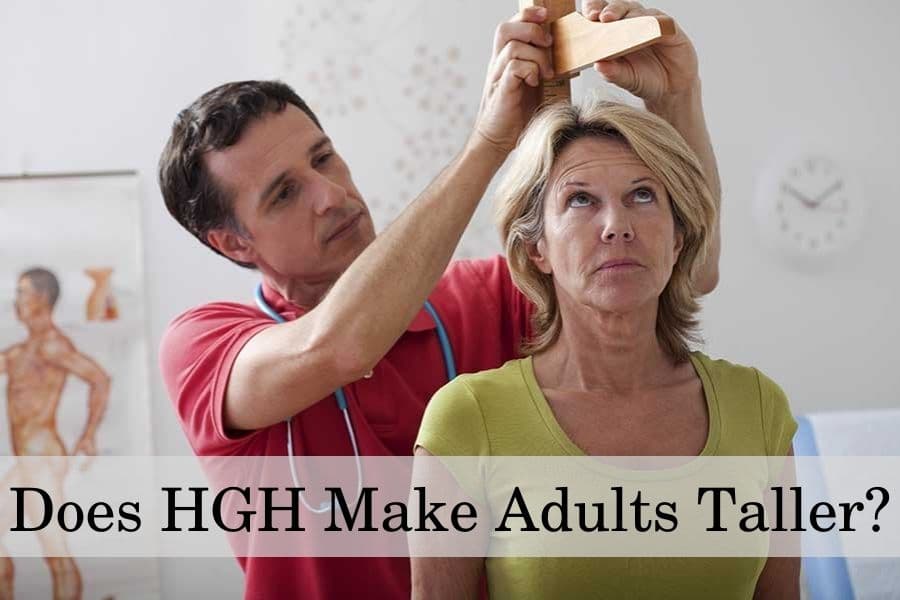