Effects and Results of Ipamorelin vs Peptides vs HGH 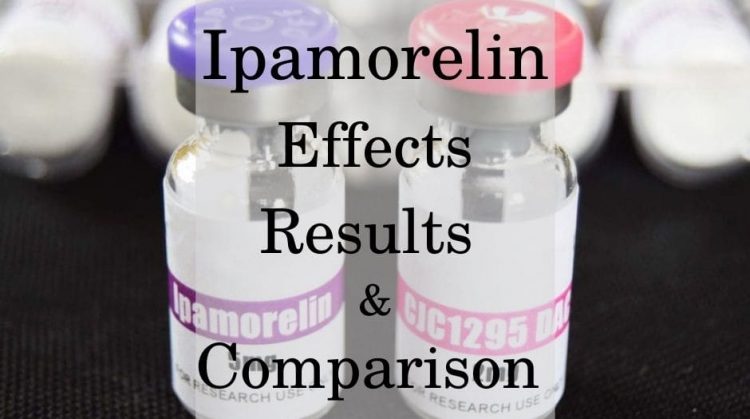 Ipamorelin is a peptide that can stimulate the pituitary gland to produce a spike in growth hormone levels. This type of peptide is called Growth Hormone Secretagogues (GHS).

It was initially developed to speed up the recovery of gastrointestinal function in patients after bowel surgery. However, it was discontinued due to ineffectiveness.

Currently, it is a non-certified product that is not manufactured by any worldwide pharmaceutical company. Nevertheless, unregulated versions of Ipamorelin are widely marketed for bodybuilding and anti-aging purposes.

Bodybuilders and athletes use GHS peptides in an attempt to improve their physique and performance despite the scarcity of scientific evidence to support such claims.

What is Ipamorelin according to science?

Ipamorelin acts as a GHS by triggering the receptors for the hunger hormone (ghrelin) in the brain, just like MK-677 (Ibutamoren). They are called growth hormone secretagogue receptors (GHS-R) and most of them are concentrated in the hypothalamus.

Normally, ghrelin binds to them and sends a signal from the hypothalamus to the pituitary gland that stimulates the release of human growth hormone (HGH). 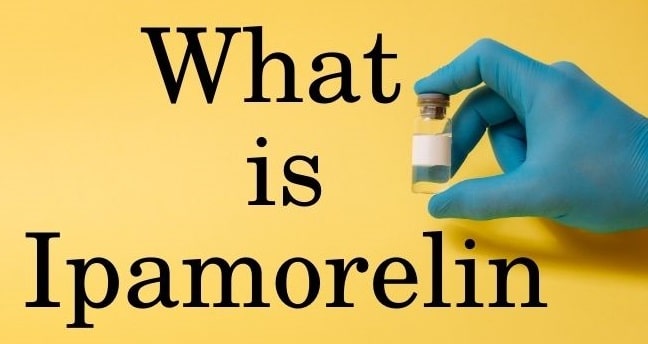 Ipamorelin has a selective effect on the GHS-R and studies reveal that it can cause a spike in HGH levels in both animals and humans. These effects have led to further clinical trials as well as the popularity of this peptide as a potential performance-enhancing drug.

The original drug was developed by Novo Nordisk and Helsinn Therapeutics and then clinically tested for the treatment of postoperative ileus. There were 2 large human trials with 117 and 320 patients each, but neither showed any benefits after 7-10 days of administration. Nevertheless, the trials showed a good safety profile for short-term use.

Since clinical trials failed to show the effectiveness of Ipamorelin, its official production has been discontinued. Currently, the peptide is not FDA-approved for human use and it is not a subject of any regulation.

Its production and distribution are considered illegal, and the FDA has sanctioned dealers who have been selling it. The FDA also warns that non-FDA-approved drugs may be dangerous and contain unknown ingredients.

What is Ipamorelin used for?

Ipamorelin is a white powder that must be reconstituted with bacteriostatic water before use. Similar to other peptides, it has to be injected subcutaneously and injection sites must be rotated to prevent lipodystrophy.

The dosage used in medical settings and clinical trials is 0.03 mg per kg of body weight administered intravenously twice daily. 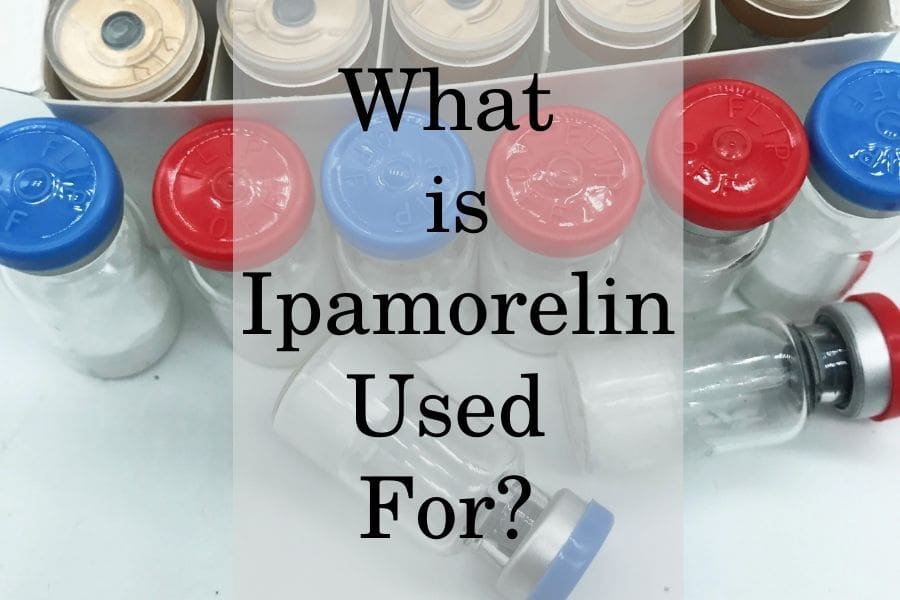 In its off-label use for anti-aging or bodybuilding, it is used in doses of 200 to 300 µg taken subcutaneously 2-3 times per day due to the short half-life.

Currently, Ipamorelin is not manufactured by any worldwide pharmaceutical company. It can be purchased from websites that do not require a prescription and the average cost for a 15mg vial is over $200. Doing so carries risk since it is impossible to guarantee the quality of the purchased product.

What are the real benefits of Ipamorelin?

The internet is full of reviews that attribute different ipamorelin benefits such as:

However, there is nothing but modest animal research evidence to suggest that few of the above benefits are real. In fact, Ipamorelin is more likely to cause fat gain rather than fat loss.

The main effect of Ipamorelin is a spike in GH levels which occurs about 40 minutes after injection, according to clinical studies. However, the spike is followed by a rapid decline and HGH levels return back to baseline after 3 hours.

That’s because the half-life of Ipamorelin is less than 2 hours when injected subcutaneously and even shorter when taken intravenously.

What are the side effects of Ipamorelin injections?

The increase in appetite might be related to the agonistic effect of Ipamorelin on ghrelin receptors which may stimulate hunger, as well as the increase in insulin production observed in animal experiments.

Whether Ipamorelin might increase the risk of obesity in humans is unknown.

Apart from the outcome of ipamorelin treatment on postoperative ileus, other effects haven’t been studied in humans. Human trials haven’t shown any side effects in the short-term, except nausea and gastrointestinal problems.

It is still unknown whether Ipamorelin can increase the risk of insulin resistance, diabetes, or other chronic conditions.

In comparison to HGH therapy, Ipamorelin has a significantly shorter half-life and leads to a short-lived spike in GH levels. According to trials, subcutaneous injection of HGH leads to a peak after 4 hours and an increase in HGH levels which lasts up to 15-20 hours. 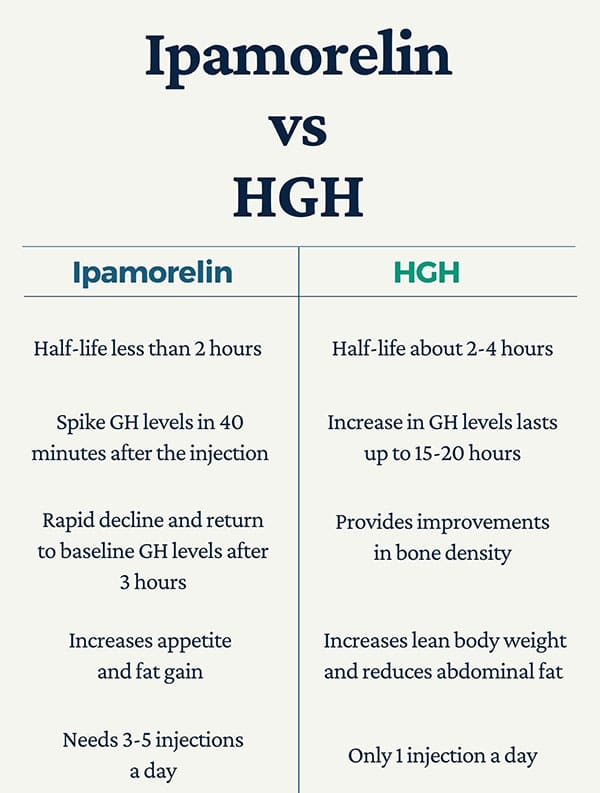 Unlike growth hormone therapy, Ipamorelin and other GHS might fail to induce similar increases in HGH and IGF-1 in chronically ill patients when compared to healthy individuals. Studies in animal models of diabetes and obesity have shown that Ipamorelin is not as effective in increasing IGF-1 as in healthy rats.

Ipamorelin and other GHS are also less convenient than HGH therapy. They require 2-3 daily injections to stimulate a sufficient increase in growth hormone levels in healthy individuals. In comparison, HGH can be taken once daily.

Furthermore, there is no evidence to confirm that Ipamorelin might provide benefits for bone density in humans, similar to the effects seen after the growth hormone replacement therapy.

Sermorelin is another peptide, an analog of growth hormone-releasing hormone (GHRH). It has the shortest half-life of all GHS – 10-20 minutes. In contrast to other GHS, it doesn’t bind to GHS-R but directly stimulates the pituitary gland into producing a spike of growth hormone. 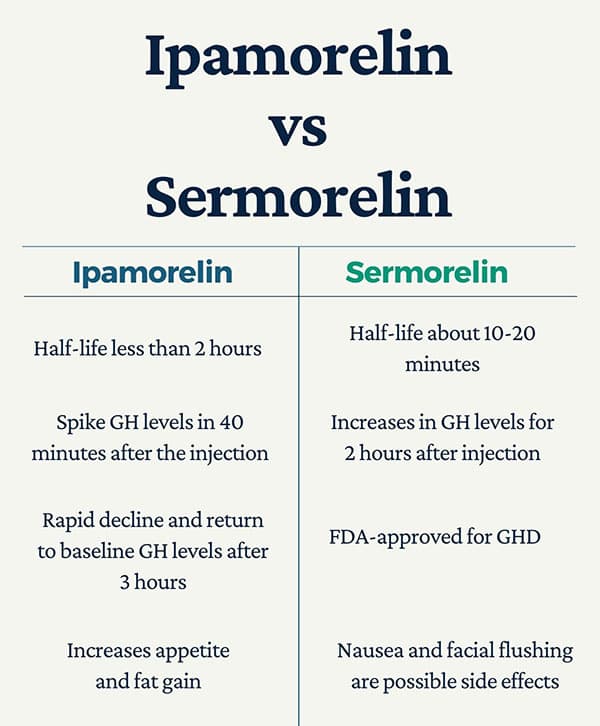 When compared to Ipamorelin, Sermorelin has been extensively studied in humans because it is successfully employed in the diagnosis of growth hormone deficiency (GHD). Thus it is also FDA-approved for this purpose.

According to human trials, Sermorelin leads to an increase in HGH for 2 hours after administration. Its effects are subject to a negative feedback mechanism by somatostatin, and thus it can’t push HGH levels above physiological norms.

Nevertheless, daily injections can lead to a notable increase in mean GH levels, IGF-1 levels, and a minor increase in lean body mass after long-term use. However, unlike Ipamorelin, Sermorelin doesn’t lead to any changes in fat mass and body composition.

GHRP-2 (pralmorelin) and GHRP-6 vs Ipamorelin

GHRP-2 and GHRP-6 are also peptides which trigger the ghrelin receptor (GHS-R) and lead to a spike in growth hormone levels. They notably increase mean GH levels and IGF-1 levels after prolonged use. The half-life of GHRP-2 is about 30 minutes and about 2-3 hours for GHRP-6.

Similar to Ipamorelin, GHRP-2 and GHRP-6 lead to an increase in appetite and weight gain

Furthermore, GHRP-2 and GHRP-6 are not as selective as Ipamorelin. They stimulate GH as well as other hormones such as ACTH and cortisol.

In comparison, studies have shown that Ipamorelin is highly selective and the only hormone it increases is HGH.

Ipamorelin is an interesting peptide that deserves more research in humans. However, its future in the pharmacy market is not as promising, because there are multiple limitations to its effectiveness.

Ipamorelin would be likely ineffective in the treatment of GHD, especially for patients with primary hypopituitarism who have damaged the pituitary gland and their natural HGH production is completely shut down. Also, it might be ineffective for substantial HGH stimulation in less sensitive individuals, such as those with obesity or diabetes.