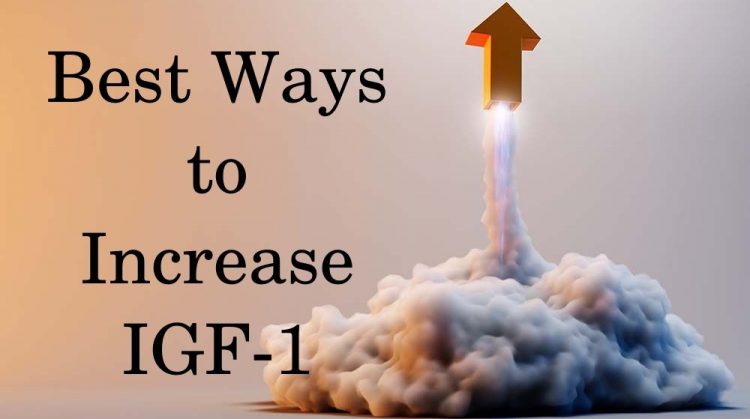 IGF-1 (insulin-like growth factor 1) is the main mediator of the anabolic effects of the human growth hormone (HGH) in your body. HGH stimulates IGF-1 production in all your tissues and organs, and the liver is the main one releasing IGF-1 in your blood.

Without the action of IGF-1, your growth hormone won’t be able to stimulate growth and hypertrophy, promote recovery, and prevent muscle loss and osteoporosis.

If you have low IGF-1 levels you may experience muscle wasting and loss of lean body weight. Furthermore, you will be at a higher risk of bone fractures and slower recovery from injuries.

Your IGF-1 levels may drop due to growth hormone deficiency (GHD), or because your cells and tissues are insensitive or unresponsive to HGH. Apart from these symptoms, patients with GHD may also experience fat gain, sleep problems and decreased quality of life.

What are the best ways to increase IGF-1 levels?

IGF-1 levels appear to increase with several lifestyle and dietary changes including:

The main benefits of having normal IGF-1 levels include its support for muscle protein synthesis and muscle growth. IGF-1 may also promote the recovery of tissues after injuries.

Yet, IGF-1 is not associated with the fat-burning effects of HGH. The growth hormone produces those effects by directly stimulating the release of fatty acids by adipose cells.

Apart from the benefits of IGF-1, many scientists also point out some potential risks, due to the fact that IGF-1 stimulates cell multiplication and inhibits cell death.

Epidemiological evidence suggests correlations between higher IGF-1 levels and some types of malignancies such as colorectal cancer. Yet, no cause and effect relationship has been proven yet.

The main dietary factor that influences IGF-1 production appears to be protein intake. Studies consistently show that consumption of foods high in protein such as dairy, eggs, fish, and meat leads to an increase in IGF-1. 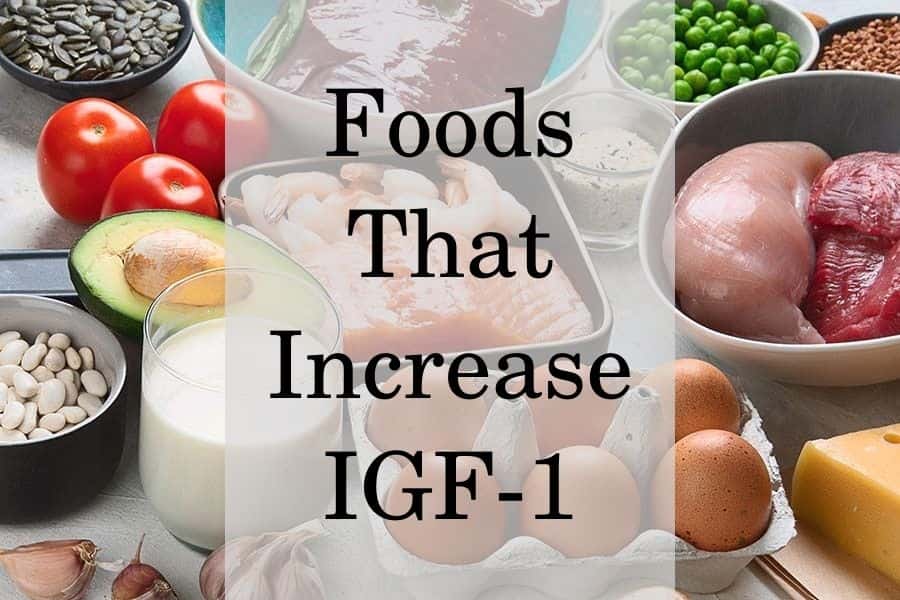 What is more, several trials have shown that low-calorie diets and energy restrictions may not affect IGF-1 levels unless protein intake is also reduced.

Negative effects on IGF-1 secretion were observed only when the patients restricted their protein intake or fasted altogether.

For example, one meta-analysis showed that alternate-day fasting or time-restricted feeding regimes can lead to a dramatic decrease in circulating IGF-1 levels.

Fasting is not beneficial for your IGF-1 levels, and skipping meals can actually decrease it significantly.

That is controversial, considering that fasting is often purported to increase the levels of HGH. Evidence suggests that fasting for up to 24 hours can raise HGH levels two-fold. However, such a long period of fasting will significantly lower your IGF-1 levels.

Scientists propose that this paradox happens because fasting increases HGH levels to prevent hypoglycemia, while at the same time it inhibits the anabolic signaling of the hormone and its effects on IGF-1.

When it comes to different foods, high consumption of milk appears to be associated with the highest increase in IGF-1 levels.

Interestingly, one study reported that each 200g increment in milk per day was associated with 10.0 µg/L increase in IGF-1, but other dairy products such as cheese and yogurt did not influence IGF-1.

On the other hand, the evidence regarding the intake of foods rich in sugar and carbohydrates is conflicting. Some studies show that carbohydrates may raise IGF-1 levels, while others report the opposite – IGF-1 lowering effects.

What is the best diet to stimulate IGF-1 production?

The best diet for optimizing your IGF-1 levels should be one that helps you maintain a healthy weight and it must contain adequate daily protein intake – at least 0.5g of protein per lb of body weight daily.

Furthermore, you should avoid fasting and split your daily protein intake into at least 3 or more relatively equal meals. Avoiding alcohol is also recommended since research shows that alcoholic drinks may lower IGF-1.

How does exercise affect IGF-1

Adding daily exercise to your routine is another lifestyle factor that may have beneficial effects on your IGF-1 levels. 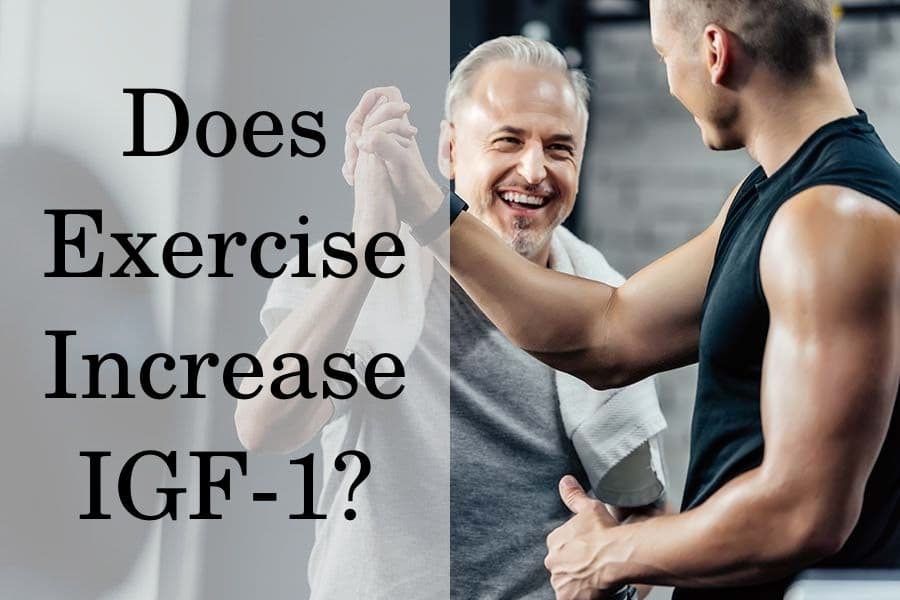 Trials consistently show that performing exercise regularly increases IGF-1 levels in the long term. For example, one meta-analysis reports that both endurance and resistance training can elevate IGF-1 as long as it is performed for at least a few months.

Working out with weights or cardio training can both be effective strategies, as long as they are done consistently

Supplements that can raise IGF-1

Since your IGF-1 depends largely on your protein intake, adding a protein supplement can successfully boost its levels. 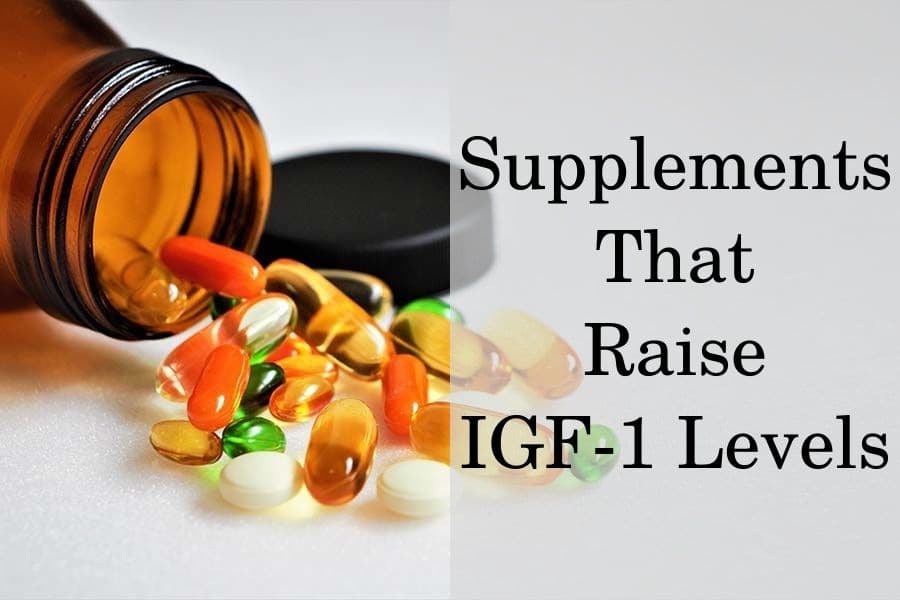 For example, one study in older women reported that supplementation with 30g of whey protein for 2 years led to an 8% increase in IGF-1 levels on average.

However, it is unclear whether the type of protein matters when it comes to its effects on IGF-1. A trial comparing the effects of animal and plant protein reported that both forms may be equally effective in increasing IGF-1 levels.

Another much shorter study in children revealed that a week of supplementation with casein (the main protein in cow milk) leads to a 15% increase in IGF-1 levels, while whey supplementation had no effect in such a short time span.

The effects of various amino acids on IGF-1 have also been investigated but only in conjunction with exercise. However, studies reveal that, unlike whole protein, supplementation with amino acids does not lead to the same increase in IGF-1.

Exercising individuals who are supplementing with branched-chain amino acids (BCAAs) are not likely to result in higher IGF-1 levels than those who exercise only.

Similar to whey protein, creatine is another popular sports supplement, which is often taken to support anabolic processes and muscle gain. However, research reports that creatine supplementation alone does not appear to influence IGF-1 levels.

The only studies showing a benefit of creatine on IGF-1 levels are those combining creatine with resistance training.

There is no clinical research on the effects of essential oils on IGF-1 levels in humans. Animal studies have investigated the effect of IGF-1 expression after topical application and they have found mixed results.

What vitamins can affect IGF-1 levels?

Vitamins and minerals do not appear to have a significant influence on IGF-1 levels.

The most promising vitamin in this regard – vitamin D, leads to a neglectable increase in IGF-1 according to a meta-analysis of 5 clinical studies.

Zinc and calcium intakes were associated with higher IGF-1 levels. However, the foods richest in zinc and calcium are red meat and dairy products respectively. Therefore it’s possible that the results are due to the protein content in these foods rather than the minerals.

Another meta-analysis of 26 studies investigating the effect of multivitamin products containing vitamin D, vitamin E, vitamin C, selenium, and zinc does not report any significant effects on IGF-1 levels.

The paper also reports that carotenoids, some of which are precursors for vitamin A in the body, may lower IGF-1, albeit non-significantly.